I’ve wanted to make tomato soup for some time but tomatoes weren’t in season when I wanted to try and I feared a flavourless watery soup if I ever attempted it. Then I saw a recipe on ‘In Jennie’s Kitchen’ that used tinned tomatoes and roasted them for an hour. I was sold. 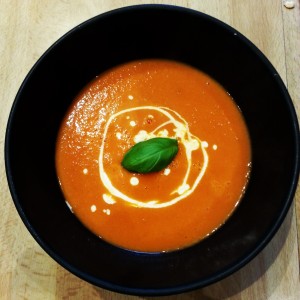 The roasting of the tomatoes in this recipe really gives this soup an exquisitely rich flavour and is definitely one worth remembering for a rainy day when you’ve only a couple of tins of tomatoes and some cream that needs using up, which is fairly regularly in this household.