Rhubarb: I was convinced I didn’t like rhubarb, I avoided many a crumble that my sister had made with it in until last week, when she made a rhubarb meringue pie and it looked and smelled amazing. I had a taste and now I am a changed woman. I can confidently say “Yes, I do like rhubarb”, I feel like this is growing up.

As if by some divine force of flavour, a couple of days later an email arrived in my inbox from Food 52 with a recipe for Rhubarb Almond Crumb Cake and I just knew I had to make it. I had 8 family members around for dinner this weekend and thought this cake would be great for a Spring/seasonal dessert; my rhubarb loving sister was there too, which seemed a good omen. The cake went down a treat, warmed and served with homemade vanilla ice cream. 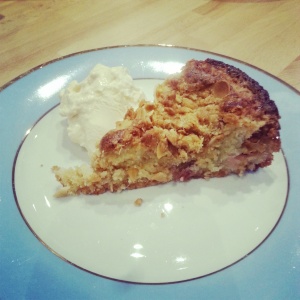 A word about books and baking: If you love baking, as I do, and dream of running a kitsch cafe/bakery where everything is organic and responsibly sourced and generally living at one with the world, surrounded by cakes but still staying slim, somehow, as if the gods look down on how fair trade all your ingredients are and say “She’s too good, let’s prevent her from being able to gain weight”, then you should read Jenny Colgan’s books. The first book of hers I read was ‘Meet Me At The Cupcake Café’ and it is a beauty. I loved this book, the characters, the recipes and whilst secretly wanting to shake the main character, Issy, and say “Come on, get a grip and go for it!!!!”, I also enjoyed that nothing was rushed. There are some great recipes in this book too and you’ll wish you had a Grandpa Joe. Also, as if this author knows me far too well she has released Christmas sequels to several of her books, I adore a festive book in the winter. This isn’t my favourite of her books though, as much as I loved it, I will reveal my favourite in the next post.